Last week, 7 enthusiastic Clearwater Middle School students and 2 proud teachers got an experience of a lifetime when they headed to North Rock with BIOS to snorkel and operate their winning Remotely Operated Vehicle (ROV) in the ocean.

The students and teachers of Clearwater Middle School were the overall winners of HSBC Explorer’s  2015 MARINE ROV Angelfish Challenge that occurred on March 8th, 2015.  The Challenge brought together 8 local academic bodies with 28 teams in an exciting competition of student-built underwater ROVs.  Over the course of 2 months, students designed, built, and practiced operating their custom ROVs.  All of their hard work was put to the test in the National Sports Centre pool, where students worked in teams to maneuver their custom ROVs through a challenging underwater obstacle course.   Read more about the Mid Atlantic Robotics IN Education (MARINE) program here: http://www.bios.edu/education/marine/. 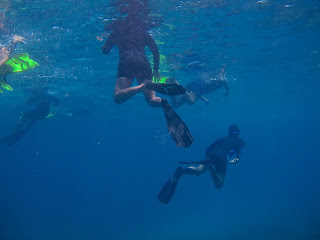 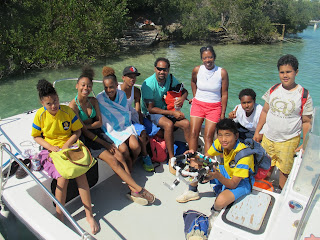 Here are the final results of the 2015 MARINE ROV Angelfish Challenge:

ROVs
ROVs are an exciting technology used in places where human research would be dangerous or potentially detrimental to human health, or costly.  Used in space, rough terrain, and deep in the water, ROVs have permitted researchers and the public to learn more about places that were previously inaccessible to humans.  The earliest ROV was actually designed in Austria in 1864 by Luppis-Whitehead Automobile, and was a type of torpedo (http://www.rov.org/rov_history.cfm), but since then, ROVs have certainly come a long way.  Recent technological leaps have allowed ROVs to be used in more places than ever thought possible, and by thousands of researchers around the world.

Here at BIOS, researchers are learning more about the complexity of the ocean with our recent acquisition of undersea gliders.  These gliders, known as autonomous underwater vehicles (AUVs), can be programmed to travel thousands of miles at a time to look for and collect oceanographic data.  Read more here http://www.bios.edu/research/projects/magic-lab/ and follow along on our Facebook page for updates https://www.facebook.com/biosstation?fref=ts on this exciting work. 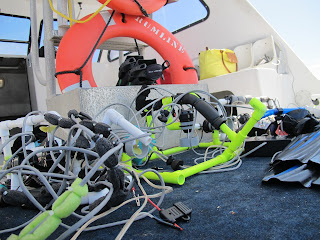 In an effort to engage the Bermudian community and young students on the island, BIOS developed MARINE, a multiyear underwater design and engineering program.  The program supports and enhances science, technology, engineering, and mathematics (STEM) education, and provides the sort of experiential group learning that traditional academic education tends to overlook.  This experiential learning can be truly transformative, as students hone their critical thinking skills, individual and group problem solving skills, and technological fluency while seeing firsthand how classroom knowledge translates into everyday use.


The journey begins
At noon, we picked up the ROV Angelfish Challenge winning group and brought them to the BIOS campus here in Ferry Reach.  The students looked full of anticipation as we fitted each of them with a wet suit, mask and snorkel, and fins.  Once everyone was fitted, given a safety briefing, and settled on the boat, we were off—headed to North Rock! 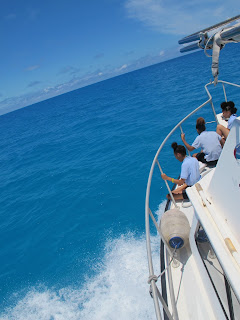 While the students eagerly looked towards North Rock, I got the chance to speak to one of the two teachers at Clearwater Middle School involved in the 2015 ROV Angelfish Challenge about his experiences leading students in the MARINE program.  McLaren Lowe has been teaching science and technology for about 10 years, and this was his first year participating in a robotics program.  It was clear that the MARINE program had an effect on Mr. Lowe who explained how the program, “rejuvenated my passion in science and technology because I think this is what’s needed in Bermuda—that’s what’s going on across the world and we have to keep up.”

Mr. Lowe emphasized that the practical education of MARINE was vital to the different ways that students learn, “I think that this project is the type of more hands on learning that is needed, especially in public education.  Not all kids learn the same way and I think that we risk losing some students who don’t fit that (traditional) academic mold.”  He explained that students who are losing interest in academics really “do well and shine in this program.”  The second Clearwater Middle School teacher, Katyna Rabain, also emphasized the strength of MARINE in engaging students on the academic periphery, “Some kids who don’t usually excel in academia were into this project, they were focused and dedicated.”

Girls in STEM
It seemed that students on the periphery weren’t the only ones who really shined in the program.  After speaking with Mr. Lowe, I chatted with three of the 13 year old girls who were part of  a 4 person all girls team for Clearwater Middle School.  When I asked if they thought the program should happen again next year, all three girls unanimously exclaimed ‘yes!’  One student told me, “They should definitely do it again.  We learned about the ocean, Bermuda, and reefs.”  The girls explained that they comprised the school’s only all girls team and that people were surprised when they won a challenge at the event, “People don’t think girls can do it.  I think we proved them wrong, because we won the Navigation Challenge.  People were surprised we won because we were girls.” 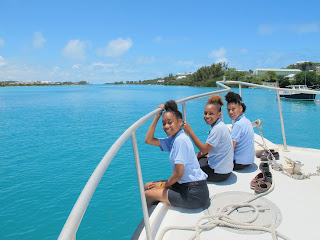 When asked if participating in the program changed their ideas of what they wanted to do in their lives, one girl explained, “I always wanted to be a doctor, but now I am thinking about things like architecture and building devices, so I think that they should have more projects like this.”  Another girl explained that she had to choose between a cooking class and a design and technology class, and was glad she chose the latter.  In a world where women in the US comprise only 13% of all engineers and 25% in the field of computer and math sciences (NSF, Science & Engineering Indicators, 2014), engaging and inspiring girls to pursue a career in science and technology seems to be yet another positive consequence of MARINE.

Snorkeling and putting ROVs to the test
Before we knew it, we arrived at North Rock.  An ideal place for snorkeling, North Rock is 7 miles from the east end and a part of the North Shore Coral Reef preserve, and a well known landmark in Bermuda’s waters.  The waters were calm, and I helped the students get into their snorkeling gear on the stern of the boat.  Soon there were splashes and laughs as the students jumped into the ocean.

I quickly joined them with an underwater camera in hand, and we all swam over to the coral reefs.  The students and teachers loved exploring the reefs and were awed by the different fish that swam by below.  Here are a few pictures of the group: 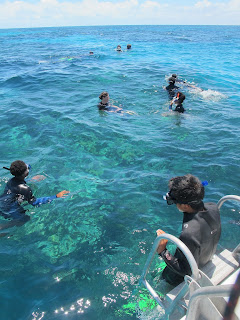 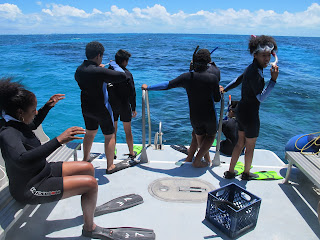 After an exploration of the reefs, the students were called back to the boat so they could try out their team’s winning ROV in the ocean waters.  The students prepared their ROV and excitedly deployed it in the water, a few staying onboard the boat to control the robot’s movements.  It was so impressive to watch the students control their custom-built ROV, and even more impressive watching the robot underwater. 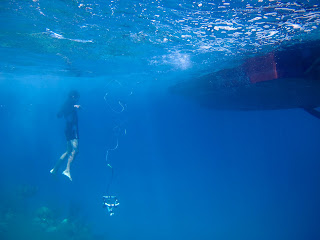 Back on board, the students packed up their robots, and dispersed around the boat for the journey home.  I found the boys team on the top deck and had a chance to speak with them about their experience in the MARINE program.  Traje, aged 13, told me “it was a positive opportunity to do it and try ROVs.  I did enjoy my time.  It helped me see different ways of doing things, a different perspective.”  His favorite part of the robotics program was building the ROVs “because we all had to work together, think, and come up with ideas.” 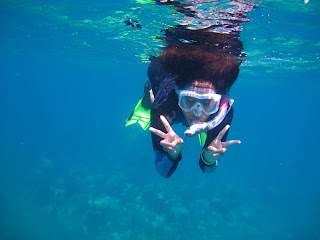 Jacari, aged 12, also enjoyed the program, “It was fun.  It felt good to do something different in school because normally we don’t get to do stuff like that.”

Both Mr. Lowe and Mrs. Rabain also emphasized the benefits of having fun while learning.  Mr. Lowe told me, “I think if you let them have fun, they don’t even know that they are learning.  When they start having fun, they begin to take responsibility for their own education, and that’s what we really want.”  Similarly, Mrs. Rabain explained, “It was like what kids like to do—video gaming—the kids knew what to do already, and just to be able to make something from scratch—see all of the parts and put it together-that was what was great about the project… there was a lot of enthusiasm (for the project).  I said I’ll take one team, but then there was 5! [laughs].  The whole class got involved in it.”

I don’t think there’s a better testament to the love and dedication for this program than that. 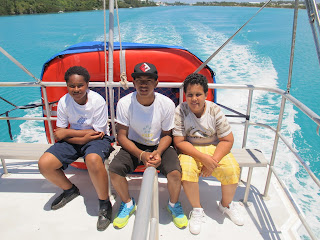 Interested in keeping up with this and other similar projects with Bermudian students?  Like us here:
https://www.facebook.com/BIOSOceanAcademy?ref=hl