Kayley You Mak, a junior at Barnard College, is working with Dr. Gretchen Goodbody-Gringley in the Reef Ecology and Evolution lab at BIOS. She is investigating how depth affects juvenile growth and survival of the common coral, Porites astreoides. By measuring differences in growth and survival between newly settled corals, Kayley is hoping to determine how the depth of parental colonies affects juvenile fitness—an indication of how well an organism can survive and reproduce. This experiment is testing the viability of the Deep Reef Refugia Hypothesis to determine if corals from deeper reefs can repopulate shallow reefs. Given the increased threats to shallow reef ecosystems, understanding how reefs may recover via recruitment of juveniles from marginal populations may indicate overall reef resilience. Below is a link to a video following Kayley on a typical day in the lab.
https://youtu.be/MLcHIDzIvkc 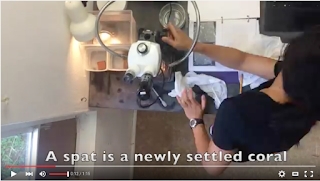 Lauren Dana, a senior at Bryn Mawr College, and Physical Oceanographer Ruth Curry, who oversees the glider program, are working to combine glider data with ship-based measurements to improve our understanding of small-scale ocean processes. The program’s three gliders, named Anna, Jack, and Minnie, run on battery power, have two-way satellite communications with shore, and are equipped with a suite sensors that enable measurements of the ocean down to 1,000- meters depth. Gliders can sample around the clock, and for months at a time, thus revolutionising the way scientists observe the ocean by increasing the amount of data acquired at a fraction of the cost of traditional technologies. For the next nine months, Minnie and Jack will sample the Sargasso Sea, measuring temperature, oxygen, salinity, nutrients, chlorophyll, and currents. The gliders have already significantly enhanced BIOS’s research and educational capabilities, and will propel important scientific advances in the coming months and years.
https://www.youtube.com/watch?v=XdqohF7v61s

This video documents the deployment of two autonomous underwater gliders in September 2015, a few miles east of Bermuda.
Video by Jason Toy 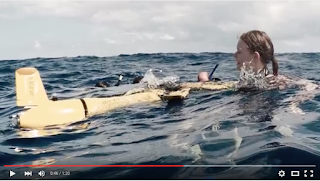 BIOS-REU intern Shasta Keyes is a student from the University Autonomous of Yucatan, Mexico, currently working with Tim Noyes in the Coral Reef Ecology and Optics Lab at BIOS. Her project focuses on the validation of a Species Distribution Model (SDM) for the invasive lionfish (Pterois spp.) population in Bermuda.
This type of model uses environmental data to predict species ranges. By relating sites where lionfish are known to occur with environmental variables at the sites (such as depth, temperature, and habitat), the model characterizes the “suitability” of habitat for lionfish across an area of interest and predicts where lionfish could be present. In this case, the geographical boundary of the model includes the 0 - 150 m depth range surrounding the islands of Bermuda.
Noyes and Keyes are using a baited camera survey method to detect lionfish presence and thus validate the model’s suitability predictions, and they hope the model outcomes can be used as a tool for managing this invasive species.
For more information about this project and baited camera surveys, contact Tim Noyes tim.noyes@bios.edu
https://youtu.be/fk8bOFArPWQ 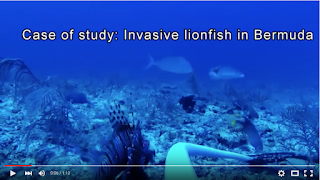 Kelvin Santana Rodríguez is a senior at the University of Puerto Rico at Humacao, and currently working with Drs. Amy Maas and Leocadio Blanco-Bercial as an REU intern in their Zooplankton Ecology Lab. Here at BIOS Kelvin is studying pteropods, a group of small marine snails that spend their entire life at sea and are found in oceans around the world. Pteropods of the order Thecosomata produce calcium carbonate shells that are negatively impacted by chemical changes in the water, and therefore can serve as useful biological indicators of change in the environment. Because most previous research has focused on polar and temperate species of pteropods and little is known about tropical and subtropical species, Kelvin is investigating how temperature impacts the respiration and development of shelled pteropods in the Sargasso Sea.
https://youtu.be/vVSN6Zc8-_U 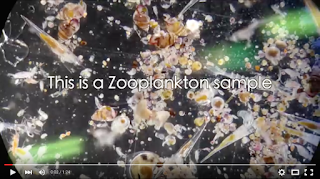 Naomi Huntley is a senior at the University of Michigan, currently working as an REU intern with Dr. Samantha de Putron in her Coral Reef Ecology Lab along with Lais Lima, a graduate student from San Diego State University/ UC Davis Ecology program. Here at BIOS, Naomi is studying the effects of short and long term cold stress in the reef coral Siderastrea radians, which is a shallow water species resilient to high sedimentation, fluctuating salinity and a wide range of temperatures. Because of the resilience exhibited by Siderastrea radians, we believe it may be a key species in understanding how environmental disturbances will affect coral reef communities and aid in making future climate change projections.
In addition to seawater temperature increases, climate change may be the cause of extreme cold-water anomalies. Our cold stress studies are characterising the species’ response at the northern edge of it’s range, a so called “marginal” habitat that may be a refuge for species survival during climate-driven range shifts, and may also host coral populations that have elevated resilience and resistance to temperature stress.
My research in Bermuda examines the response to thermal stress at the northern end of their range. In the future, Lais and Dr. de Putron plan to replicate these studies in Brazil to examine their response at the southern end of their range. This work will help determine if marginal populations show similar responses to thermal stress.
https://youtu.be/UII40SC9vvw
All coral collections fall under limited impact research under the BIOS collecting and experimental ethics policy (CEEP) guidelines. 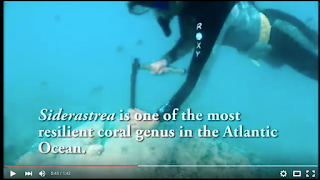 Sarah Amiri is a junior at the University of California, Santa Barbara majoring in biology with a minor in aquatic biology. She is currently working as an REU intern with Rachel Parsons in the Oceanic Microbial Observatory at BIOS. Sarah is investigating the bacterioplankton community within the oxygen minimum zone (OMZ) in the Sargasso Sea, using the Bermuda Atlantic Time-series Study (BATS) site. An OMZ forms at approximately 800 meters depth. Since light is limited at this depth, oxygen is not produced by photosynthesis and the oxygen available is consumed through respiration by bacteria and other organisms. Using molecular techniques, Sarah will identify and quantify the key bacterioplankton within the OMZ, understand the functional role that these bacterioplankton play within the OMZ and finally, if time allows and the data is available, link this bacterioplankton community structure and metabolism with the biogeochemistry measurements already being taken by the BATS program. Sarah’s project could potentially determine how the bacterioplankton community within the OMZ impacts the oceanic carbon, nitrogen and sulfur cycles at the BATS site.
https://youtu.be/rvQaEe66n6o 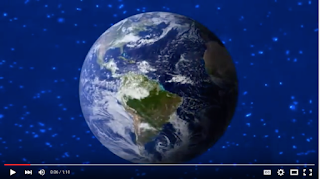 Hannah Saraceno, a senior at the University of Oregon, is working with Eric Hochberg in the coral reef ecology lab at BIOS. Hannah is researching the effects of temperature change in seawater on a coral community’s light use efficiency. This is a measure of how efficiently corals use available light for photosynthesis, the process that uses sunlight to synthesize food from carbon dioxide and water.  Scientists calculate light use efficiency by dividing the coral’s primary productivity by the amount of available light that is absorbed by the coral. By comparing light use efficiency at varying temperatures, Hannah hopes to use this parameter as an indicator of coral stress. Her research will be used to develop additional methods to measure the condition of coral reefs worldwide, as well as threats to their viability. 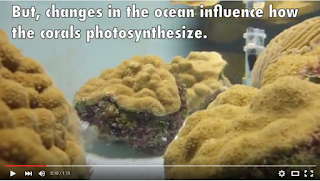 Jenni Tuomisto is a student at Bloomsburg University of Pennsylvania working in the zooplankton laboratory at BIOS with Dr. Leocadio Blanco-Bercial. Plankton refers to aquatic organisms that drift with the currents. The opposite of plankton is nekton, meaning any animal that swims against the current, like dolphins, whales, and fish. Jenni has been studying one type of zooplankton (an animal-type plankton as opposed to a plant-like phytoplankton) called copepods. Jenni has been testing the experimental suitability of a specific order of copepods, calanoids. For example, she found that one species of calanoid unexpectedly cannibalizes its eggs under experimental conditions. For more information about this research email research@bios.edu.

Posted by Bermuda Institute of Ocean Sciences at 11:29 AM No comments: