Dr. Mike Lomas, Chief Scientist aboard the 2011 BVAL cruise, takes time out of his hectic schedule to share his experiences on this year's expedition:

After an unscheduled steam back to Bermuda, things turned around for the better.  We spent the night of October 7th tied up to Penno's Wharf in St. George's enjoying a short break.  Bright and early on the 8th it was back to sea.  We steamed for nearly a day to get back to the next station on our transect from Bermuda to Puerto Rico.  When we arrived at the first station it was clear the less than ideal luck had not been left behind - the stern A-frame wasn't functioning.  With a minor change in plan we used the starboard A-frame to deploy our optical sensor package and it actually worked much better.  The cruise settled down after this and we started to get in a groove.  We were able to conduct our short 30km transects across convergent and divergent eddy interfaces, we occupied all the odd latitude stations that we had time left to occupy.  'Part 2' of the first leg of the cruise ended well. 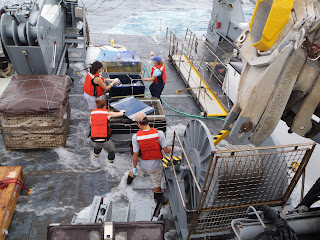 BIOS Research Technicians and Interns hard at work on the aft deck.

We arrived in San Juan Puerto Rico at ~1600 on the 13th of October.  After tying up to the dock it was a short but anxious wait for U.S. Customs and Immigration officials to come by and clear us all off the ship.  Once done it was a mad dash to the cash machine and then on to WalMart to pick up some extra coolers for shipping back samples.  Due to it being rush hour the trip ended up being longer than it should have but in the end we headed back to the ship.  After a quick science meeting to hand the reins over to Steve Bell who would be the Chief Scientist for the 2nd leg returning to Bermuda, it was time to relax for a little bit and enjoy being on solid ground. Waves crashing over the starboard gunwales during a CTD deployment.

The next morning, myself and several others left for the airport bright and early for the trip back home.  The afternoon of the 14th, the Atlantic Explorer started her steam home to Bermuda.  As luck would have, they had a following sea and beautiful weather and made great time.  In fact they made such great time they arrived back in port a day early.  Now the packing up is nearly done, samples have been sorted and arrangements made for all the ancillary research groups to get their gear back to their home institutions.  It's now Friday the 21st and the cruise is pretty much a wrap. BIOS staff and international colleagues at the dock in Puerto Rico.
All photographs appear courtesy of Steve Pike from Woods Hole Oceanographic Institution.

Until we sail to Puerto Rico next year...
Posted by Bermuda Institute of Ocean Sciences at 9:48 AM No comments:

Well at least I think it's day 6. It's hard to keep track of the days. The beginning of the cruise was going well until we had to run away from Hurricane Ophelia! We managed to work as planned up until Saturday afternoon but then we had to steam way off course to avoid the storm. We actually ended up not far off the coast of the US, in an area called George's Bank but with Ophelia moving up to a Category 4 we couldn't take any chances. If you follow this link you can see where we went.


Saturday's weather was still pretty rough, with the sea washing over the back deck while we tried to work. Although this was nothing to do with the hurricane, it was just a little squall! We had hoped to do some sampling at 40 degrees north but only managed to get to 39 degrees north before we had to change course. Oh well, next year we might make it to 40 degrees north! So apart from finishing off the samples from Saturday we haven't been able to do any science because we are not in the right area.


Later today we hope to be in position for the guys from Woods Hole to carry out a 16km line of sampling. Then we should arrive at the regular BATS site some time Wednesday morning and fingers crossed, we can carry on as planned. We have missed a big chunk of work north of Bermuda that won't get done this year - but they have extended the return leg from Puerto Rico by one day to try and squeeze in some extra work.


Now we just have to hope Philippe doesn't come our way.
Posted by Susan at 9:08 AM No comments: